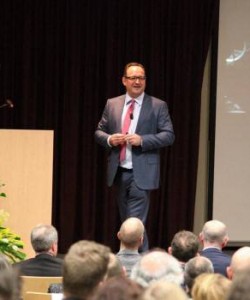 Prof. dr. Stefan Stremersch received the International Francqui Chair 2015 at the University of Ghent. Every year, the Francqui Foundation bestows 2-3 International Chairs on the recommendation of the board of directors of Belgian universities. These chairs are given to professors who excel in their respective expertise fields and are honorary in nature. Prof.dr. Stremersch is granted this title on top of his current affiliations at Erasmus University Rotterdam and IESE Business School. The goal of the Francqui Chair is to promote inter-universitary cooperation, the development of higher education and the stimulus of scientific research in Belgium. During his inaugural address, entitled “Wiring Innovation in Firms’ DNA”, Prof. Stremersch combined insights from his academic research and experience with companies to argue that grassroots innovation is the best strategy to promote innovation and escape economic stagnation. The inaugural address was followed by a panel discussion with distinguished guest such as Kris Peeters (Vice Prime-Minister of the Belgian Federal Government), Peter Claes (Director Media and Production, VRT), Marnix Botte (President Belgian Industrial Research and Development Association (BiR&D)) and Jacques van den Broek (CEO of Randstad).
ECMI Research Presented at ESE-Ghent Symposium in Ghent, Belgium ECMI supports UNICEF to innovate for a better society